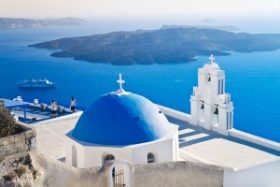 As tourists gambol around the Greek islands this summer, an international team of geoscientists is embarking on a research cruise to deploy instruments on the sea floor near one of the region’s most famous holiday destinations, Santorini. The team hopes to keep tabs on a massive volcano there that showed signs of unrest last year.

â€śWe want to see if there is any deformation of the sea floor, which may be related to possible [volcanic] inflation of the area,â€ť says geologist Dimitris Sakellariou, from the Hellenic Centre for Marine Research (HCMR) in Anavyssos, near Athens, who is the cruise leader.

A church in Santorini, Greece, overlooks a submerged volcanic crater where the sea floor is being monitored for movements that could indicate the volcano is waking up.

The Santorini caldera is a mostly submerged volcanic crater, with raised edges that form a picturesque arc of islands in the southern Aegean Sea. The arc is all that remains of an island, the centre of which collapsed during an eruption tens of thousands of years ago. In about 1650 bc, the volcano unleashed a series of massive eruptions that many blame for bringing down the Minoan civilization, which was centred on nearby Crete