Welcome to HYDROBIOLOGICAL STATION OF RHODES! 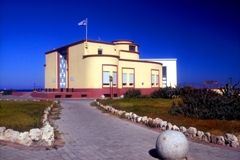 In 1934, during the Italian occupation of the Dodecanese (1912-1943), following a decision of the Italian governor Œúario Lago, the building of the ‚ÄúReale Istituto di Ricerche Biologiche di Rodi‚Äù commenced, in the far north cape of the island. The construction was completed by 1935. In 1937 the building began to operate, studying the hydrobiology, the sponges, fisheries of the Aegean sea and hosting an aquarium with interesting species of the marine fauna of the Mediterranean.

Designed by Armando Bernabiti, the building combines local architectural elements with Art D√©co elements of curved lines and circular windows, along with a dominant cylindrical tower. The decoration of the main entrance draws inspiration from the marine environment. The Aquarium consists of a corridor, with small tanks, that host marine species on both sides, made of stone and decorated by natural shells, featuring an underwater cave, while the floor is paved by white and black pebbles, featuring marine species.

Since the integration of the Dodecanese to Greece, in 1948, the Hydrobiological Station of Rhodes,belonging to Hellenic Centre for Marine Research, is a very important Recearch Institute on physics, chemistry, biology and geology of the seas and the inner waters, at national and international level.

The Hydrobiological Station also operates as a research museum, hosting the aquarium and an exhibition area added in 1971-1972, on the north side of the building.

The building of the Hydrobiological Station of Rhodes is declared by the Hellenic Ministry of Culture a historical preserved building, distinguised examble of the ‚ÄúInternational Style‚Äùarchitecture.

TOP Skip to content
We use Cookies to ensure that we give you the best experience on our website. If you continue to use this site we will assume that you are happy with it.OkPrivacy policy