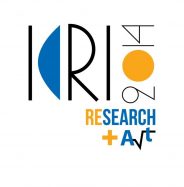 Art has long been interested in research and science: from Renaissance art and Leonardo da Vinci with his studies of physics, to 20th century art with Surrealists drawing on Freud and the subconscious, to the contemporary American James Turrell working with the optical illusions of light and the young Chinese WU Juehui dealing with the visual aspects of neuroscience, artists have been fascinated by research and science and have been deeply influenced in the course of their work. However, the creative approach of art by scientists and researchers could prove highly interesting as well.

A competition and exhibition under the theme of “Research and Art” will accompany the 2nd International Conference on Research Infrastructures taking place in Athens, at the Megaron, 2-4 April 2014.

The competition is addressed to adults, worldwide, working on the artistic or scientific fields, but also to adults from any professional or other field willing to submit a work focusing on the interface between research and art. The works to be presented in the exhibition will be selected by a three-member committee (the names of its members will be announced shortly).

“Research and Art” competition and exhibition are both taking place in the context of the Hellenic Presidency of the European Union Council and are organized by the European Committee, the Athena-Research Center and the General Secretariat for Research and Technology of the Greek Ministry of Education. Curator: Elizabeth Plessa.